From 09 to 13th of May different artsdatabanken projects within the Natural history museum joined efforts during a fieldwork trip to Hjartholm located at the Sognefjord.

The Sognefjord is an interesting fjord for sampling as it is the largest and deepest fjord in Norway and the second largest in the world! This often results in some unique fauna, especially at greater depths. Therefore HYPCOP (Hyper benthic copepods), NORHYDRO (Norwegian Hydrozoa), AnDeepNor (Annelids from the Deep Norwegian Waters) and Hardbunnsfauna (rocky shore invertebrates) travelled toward the small town Hjartholm were we set up laboratory and living space for sampling and processing fresh material.

Hjartholm is located towards the exit of the Sognefjord. From here we would do shallow and deep sampling with help of Research Vessel Hans Brattstrøm

Team members from different projects, Norhydro, HYPCOP, hardbunnsfauna and AndeepNor in front of the boathouse that was transformed into a lab for the occasion AnDeepNor was on the quest of collecting marine bristle worms (annelida) from the deepest part of the Sognefjord, about 1000m deep. Jon Kongsrud with the grab

This would be done with the help of research vessel Hans Brattstrøm and a so-called grab. A grab is a device that looks like a clamshell made out of heavy metal. It would be dropped in the water open, and once touching the bottom it would close and grab soft bottom sample.

Unfortunately, on the first day some important machinery for collecting deep samples broke after the third grab. And therefore, AnDeepNor was stuck with only 3 samples for the remaining of the fieldwork days. The good news however is that they did find a great diversity of worms in the only 3 grab samples they found. Once the worms were sorted, preliminary identified and catalogued small tissue was clipped of 96 specimens for barcoding at the University of Bergen DNA laboratory.

All the results of this will be publicly available at the end of the AnDeepNor project in October this year. We are looking forward to their results!

NorHydro has been working hard on collecting hydrozoan samples from different localities in Norway. This time they were more than happy to join the possibility of getting some seriously deep samples from the Sognefjord. With their plankton net they went sampling up to 1200m, which resulted in some beautiful specimens

They also took the opportunity to collect some shallow-water benthic hydroids, just in front of the lab where there was a small dock for boats. In the lab they set up a photo-studio to make some beautiful macro images of their collected specimens for everyone to enjoy. HYPCOP (Picture 9. Team HYPCOP with ltr Francisca Carvahlo, Cessa Rauch and Jon Kongsrud) focus this time was mainly shallow water around the Sognefjord by snorkelling (picture 10. Sampling for Hardbunnsfauna and HYPCOP by means of snorkelling), we sampled from 4 different stations and as you can guess, there were copepods in all of them. However, some locations had definitively more diversity than others, this mostly had to do with the site being more exposed, or whether there was a lot of freshwater run-off from land that would influence the sites salinity. The fresh collected copepods were photographed and are now ready to be prepared for barcoding in order to determine the species. And although small, they can be very beautiful as well, just not always easy to photograph such active critters. 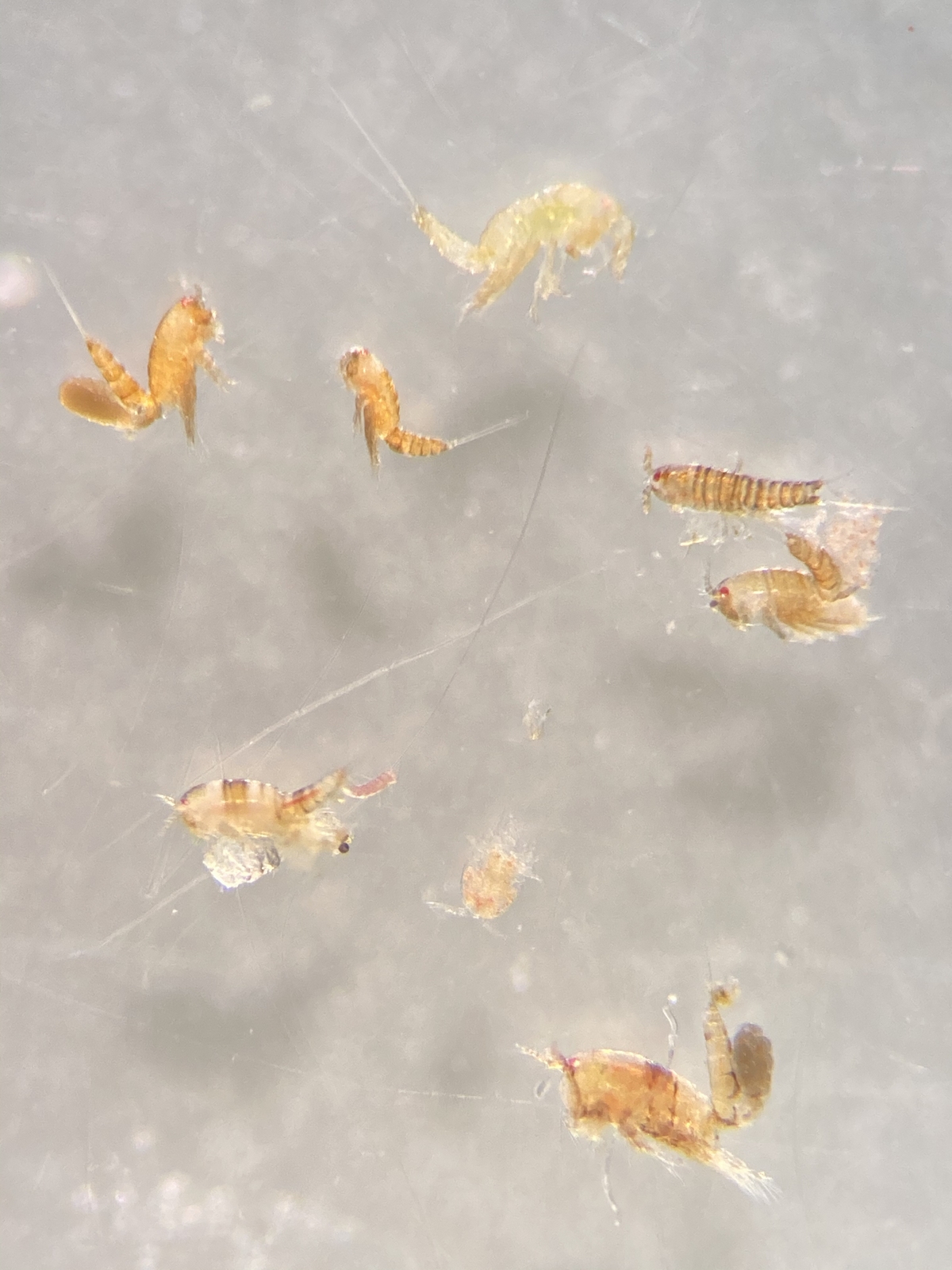 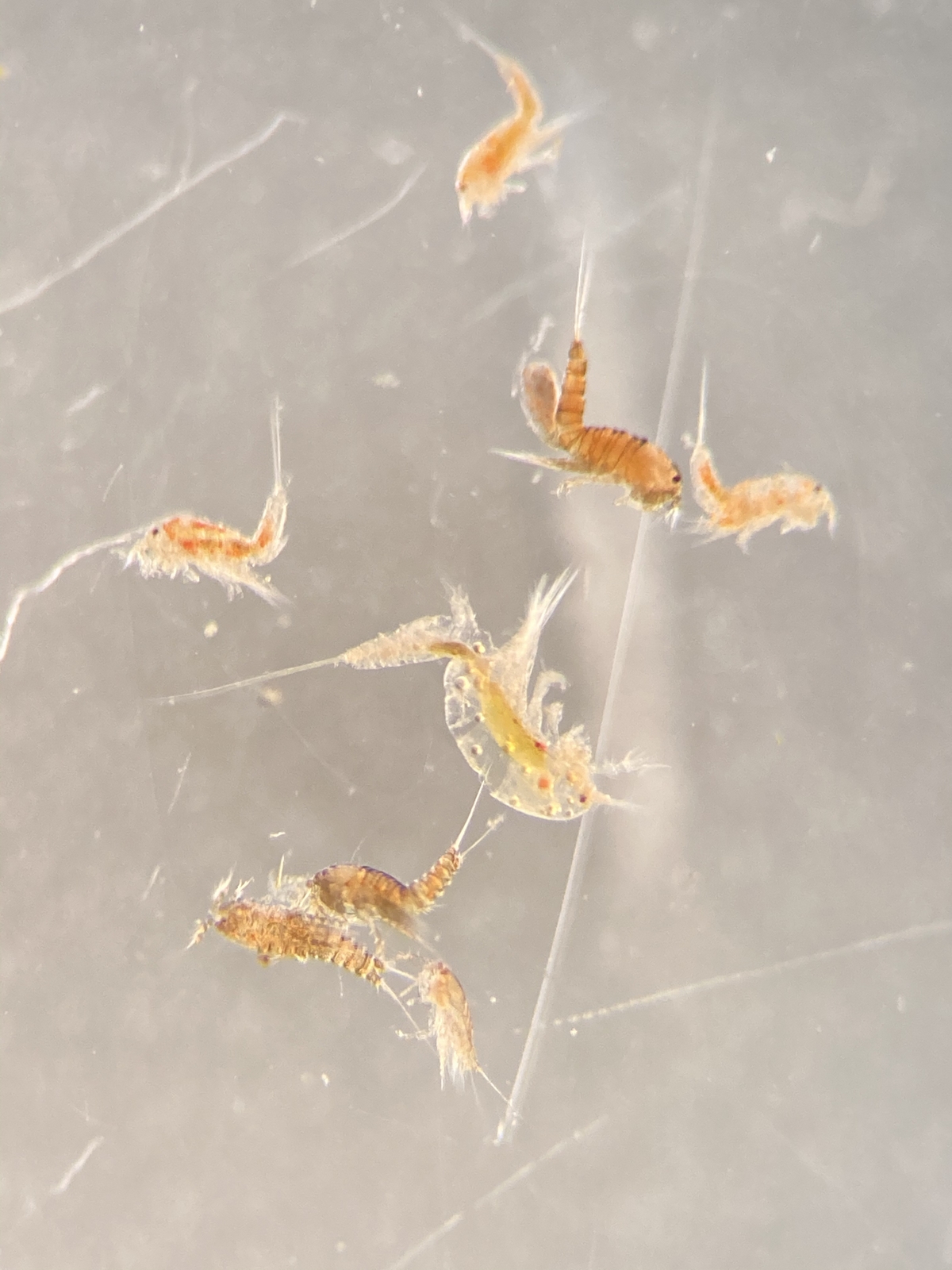 A Drop of copepods from the Sognefjord

Even though we had to deal with some gear equipment failure, we still managed to have a very productive week of sampling, in which all the participating projects got their hands-on valuable specimens from the amazing Sognefjord!