Unravelling the mysteries of Amphipods

This last week Ania and Anne Helene have been filling the lab with details about antennae, epimeral plates and hairs (setae) on all appendages imaginable and unimaginable. The first dive into the west-African amphipods has been made, and we chose to focus on a family that is easily distinguished from the rest of the amphipoda: the Phoxocephalidae.

This family was first described by G.O. Sars in 1891, and in the northern Atlantic it is a friendly group to examine – it does not have too many species. On a world-basis, however, there are 369 species of Phoxocephalide described, within 80 genera (as of dec 14 2015). The whole groups is easily recognized by their “pointed hoods” – the head is drawn forwards just like a hood that is pulled as far to the front as it goes.

Ania has much of her previous experience from the Antarctic and Anne Helene has worked in the Arctic, so west-African waters seemed a good place to meet – if not literally then thematically. Being physically in the same lab is probably the best way to collaborate on examining small animals, and we had a week of long and happy days in the lab. Why did we think the Phoxocephalidae would be a good starting point for examining the amphipod-fauna of the West-African waters? There were moments during the last week we asked ourselves this question. There are some reasons, though. To be able to identify species of amphipods you normally have to examine a collection of characters such as the antennae, sections of the different legs (Amphipods do have a lot of legs!) and the different sideplates (for example the epimeral plates).

In difference with many other amphipod groups the Phoxocephalids do not have a lot of appendages that are sticking far out of the main body, so there are not so many pieces that break off ethanol-preserved specimens – and that gives us a bit easier job.

But there are not many studies of the smaller crustaceans from these waters previously, so we were not expecting to be able to put names on much of what we were looking at. This prediction proved true – we have found one already named species (Basuto stimpsoni Stebbing, 1908) in all our samples. In addition to this we have found what we think are 27 other species – but we do not have a name for most of them. For many we don´t even have a genus name.

How will we continue with this group? The first step is to see if our 28 putative species really are different – for this we will first map their DNA barcode (COI). Depending on what results this gives us, we will be able to see how many new species we end up with.

There is definitely more to come from this study, and we promise to write about it when we know more (that will, however, not be in this advent calendar)… From the pre-PCR lab The four PCR-machines lined up

We are very fortunate in that we have a modern DNA lab available «just down the street» from us, as the University Museum is part of the shared Biodiversity laboratories (BDL) structure.

The BDL is a formalized cooperation between three research groups at Dept. of Biology (Marine biodiversity, Geomicrobiology and the EECRG), and two of the research groups at the University Museum. One of the senior engineers if this lab is a Museum employee, and from time to time we are also able to hire in other collaborators for specific projects. For the past couple of months we’ve had a technician – Morten – working on resolving some of the challenges that we run into when we work on COI barcoding of marine invertebrates.

Unlike many of the other groups that this method works exceedingly well for (like the Diptera), we are experiencing difficulties in obtaining DNA barcodes from a significant proportion of our samples. We are currently focussing particularly on the Polychaeta (bristle worms), as this is the group we have submitted the majority of samples from in both our major barcoding projects: MIWA (Marine Invertebrates of Western Africa) and NorBOL (Norwegian Barcode of Life).

Morten has been working on obtaining DNA from the more problematic species, by troubleshooting and tinkering on various aspects of the ways we extract and amplify genes.

Basically there are more or less standardized ways of obtaining DNA, and these methods normally works well. Unfortunately (for various reasons) this is not always the case, and this is where we have to alter the protocols to see if we can find a way to retrieve the sample DNA from the specimens.

So far it looks quite promising; we’ve been able to fill in some of the most important “blanks” in our datasets – and we’re not done yet!

Sorting the Crustacean samples from our

Most work is more fun when working together. It also makes for better science to cooperate – and the easiest way to cooperate on taxonomy is to sit at the same lab for some time – to be able to look at the same specimens and see the same details that should be examined. This is the plan for the amphipods from the MIWA-project. Ania Jażdżewska from the University of Łódź in Poland is visiting our lab for an extended week of collaboration with me in a mini-workshop on the amphipod samples.

But before a visitor can come, preparations are necessary. So for the last 6 weeks I have been sorting all the ethanol-samples of our west-african crustaceans into separate orders (isopods, tanaidaceans, cumaceans, decapoda), and the amphipods (also an order) have been sorted to family. 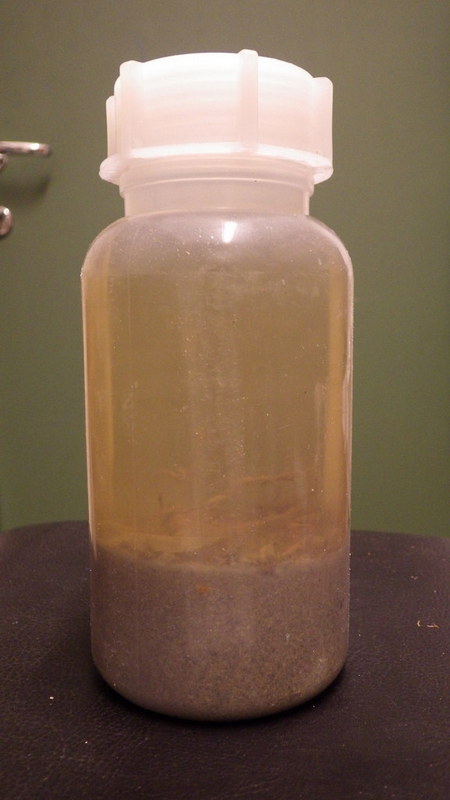 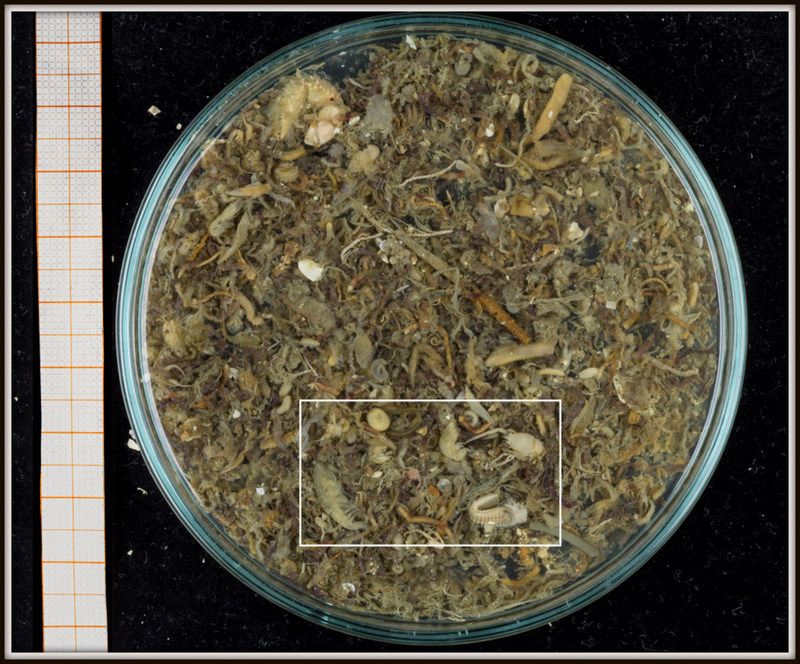 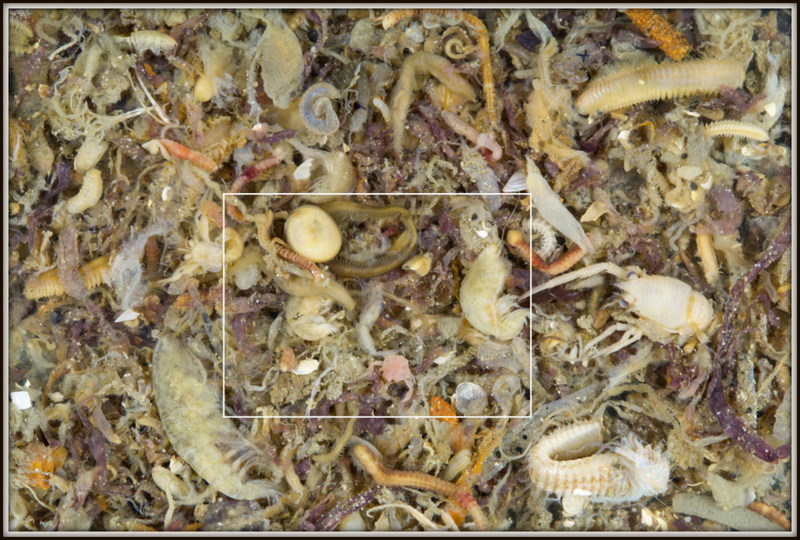 Zooming in… there are many, many animals in this particular sample! (photo: K. Kongshavn) 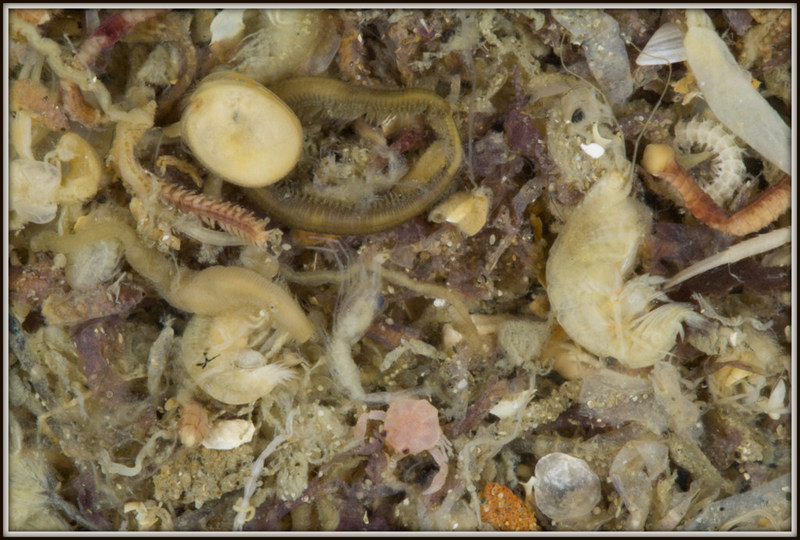 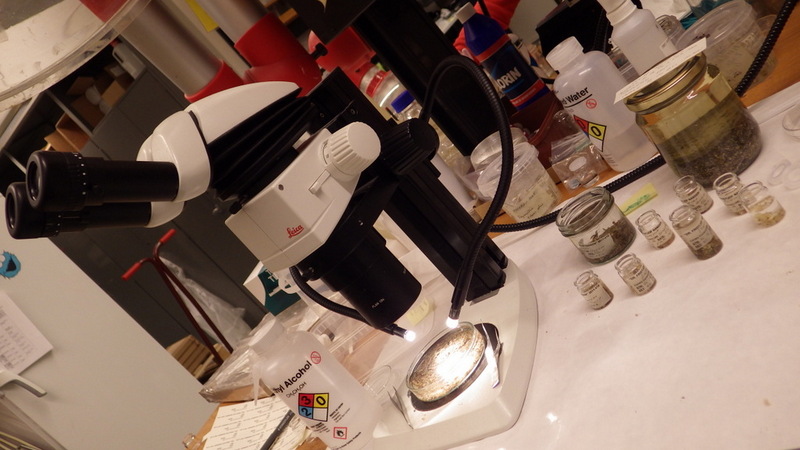 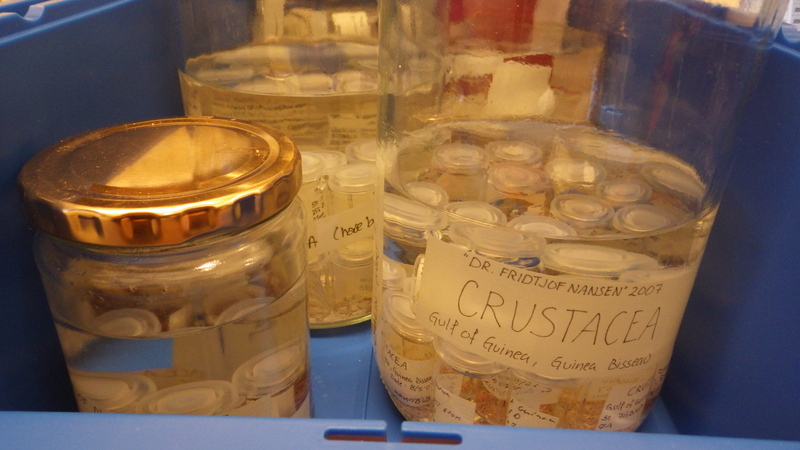 The jars marked Crustacea are then turned over to the people who work on the various crustacean groups (Photo:A.H. Tandberg) 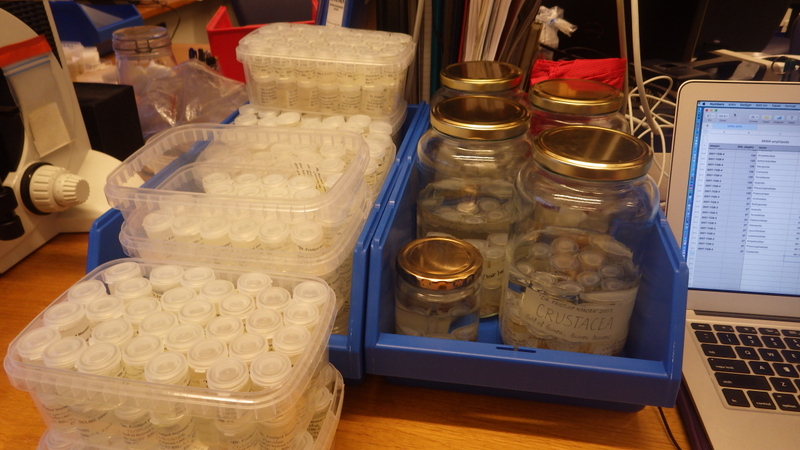 From subphylum (Crustacea) to families and beyond (Photo:A.H. Tandberg) 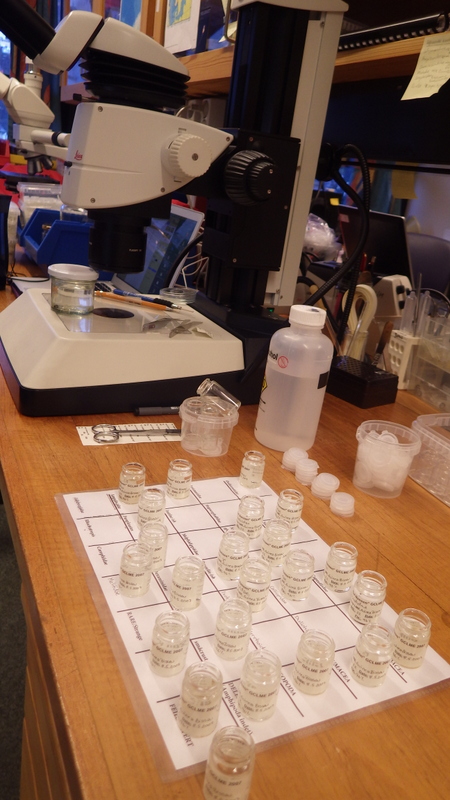 They then sort it further… (Photo:A.H. Tandberg) 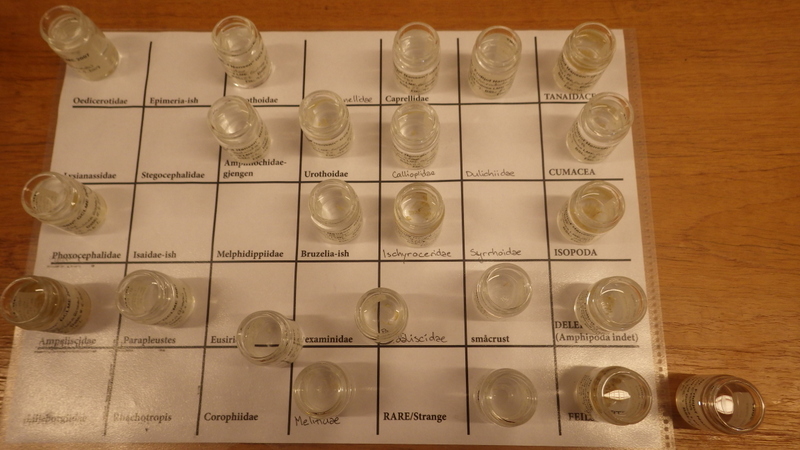 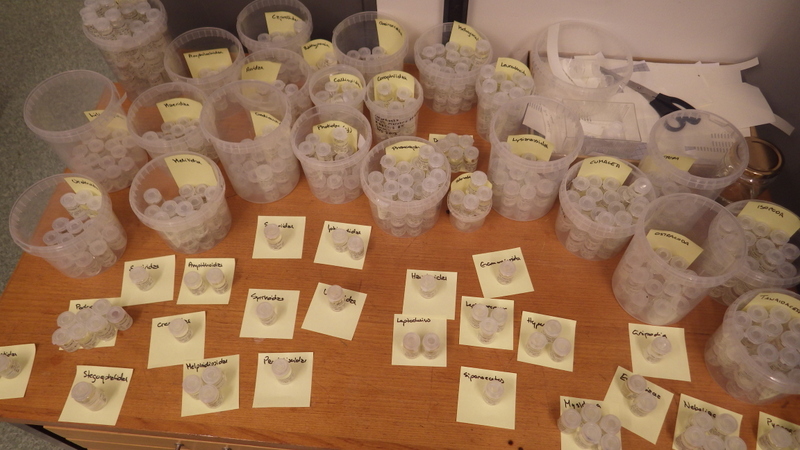 Eventually we have a pile of vials sorted to family (or order, or species…) level (Photo:A.H. Tandberg)

98 samples have been split into 629 smaller vials – ready to be further examined when Ania comes.

We promise a follow-up on what this brings of fun science! Last week we had yet another visitor here, this time from the University of A Coruña in Spain. Julio was here to continue his work on polychaetes in the family Oweniidae, from both Norwegian and African waters. The invertebrate collections are high in demand these days, and we have a string of visitors coming here to examine the material. One of these is São from the University of Aveiro, Portugal. She works with polychaetes in the family Nephtyidae. In her own words:

18-23 October – After an amazingly (for Bergen ☺) sunny Sunday, with a wonderful walk through the mountain, I had a very productive week looking through nephtyids from Western Africa. More than 300 specimens were examined and ascribed to 13 putative species. The results were very exiting! Interesting distribution patterns and a couple of potentially new species for science. Now we are waiting for barcodes… The Casino building of the Goethe University

Almost 300 researchers from many nations were convened last week at the beautiful Campus Westend of the Goethe–University in Frankfurt for the 8th International Crustacean Congress (ICC-8). Many interesting talks and high quality posters were presented over six days. A special workshop on DNA-identification and barcoding filled the auditorium to the the edge and left many attendants standing through the session. EW gave a 15 minutes talk on results from our barcoding of decapods and stomatopods. He particularly emphasized how barcoding can reveal discordant species identifications among different labs and research environments and pinpoint the need for reidentification and / or taxonomic revision of species. Kenneth Meland (BIO, UiB) presented results from phylogenetic analyses of the ancient group Lophogastrida.  Separate analyses of morphological characters and DNA from four genes show surprisingly congruent results and have given us a new understanding of relations among  the  families of the group. Meland cooperates with EW and Stefan Richter (Univ. Rostock) in this  project. We’re spending the first two weeks of July out on our marine field station, running a workshop with participants from nine different countries on material from Western Africa. You can read more about this on our project blog: Marine Invertebrates of Western Africa In addition to the crabs (Brachyura) discussed in the previous post, we are also focusing on animal groups such as the brittle stars (Ophiuroidea) and bristle worms (Polychaeta).

Currently we are preparing samples for genetic barcoding though the BOLD system.

Here are a couple of photographs of the animals that have been through the mill of identification – photo documentation – tissue sampling this week. A bristle worm from the family Maldanidae, partially encased in the tube that the animal dwells in (scale bar is 0.5 cm) Another and rather different looking bristle worm, this time from the family Onuphidae. Scale bar is 0.5 cm