On August 10, four delegates from the University Museum of Bergen made their way to Monterey Bay California, USA. This year the World Congress of Malacology took place at the Asilomar conference grounds in Pacific Grove, Monterey. Monterey Bay is well known among many marine biologists due to its world-famous aquarium and aquarium research institute (MBARE), many marine protected areas (7; including the Asilomar State Marine reserve, close to where the conference was held), Hopkins Marine Station of Stanford University, Steinbeck Center (although located in Salinas, close enough to make it count). The latter was named after the famous marine biologists John Steinbeck and Ed Ricketts from the Monterey County; Among other works they contributed to marine biology with their famous books ‘The sea of Cortez’ and ‘Between Pacific Tides’. All in all, Monterey Bay seems like an exciting place to be for us marine biologists.

The World Congress of Malacology was organized and chaired by the famous Terry Gosliner (Terry described more than 1000 species of sea slugs!) a senior curator of the California Academy of Sciences. About 300 participants contributed to a very lively and busy scheduled week

Some of the participants of the World Congress of Malacology 2019

Registration for the conference started on Sunday the 11th of August, but Monday was the real kick off of the program with fabulous keynote speakers such as Geerat Vermeij, David Lindberg, Susan Kidwell, etc.. During the poster session Jenny Neuhaus and Cecilie Sørensen, two of our master students working in close collaboration with the Museum project Sea Slugs of Southern Norway have presented their preliminary results. Unfortunately, Cecilie could not join us due to time constraints, and the poster was presented by Cessa 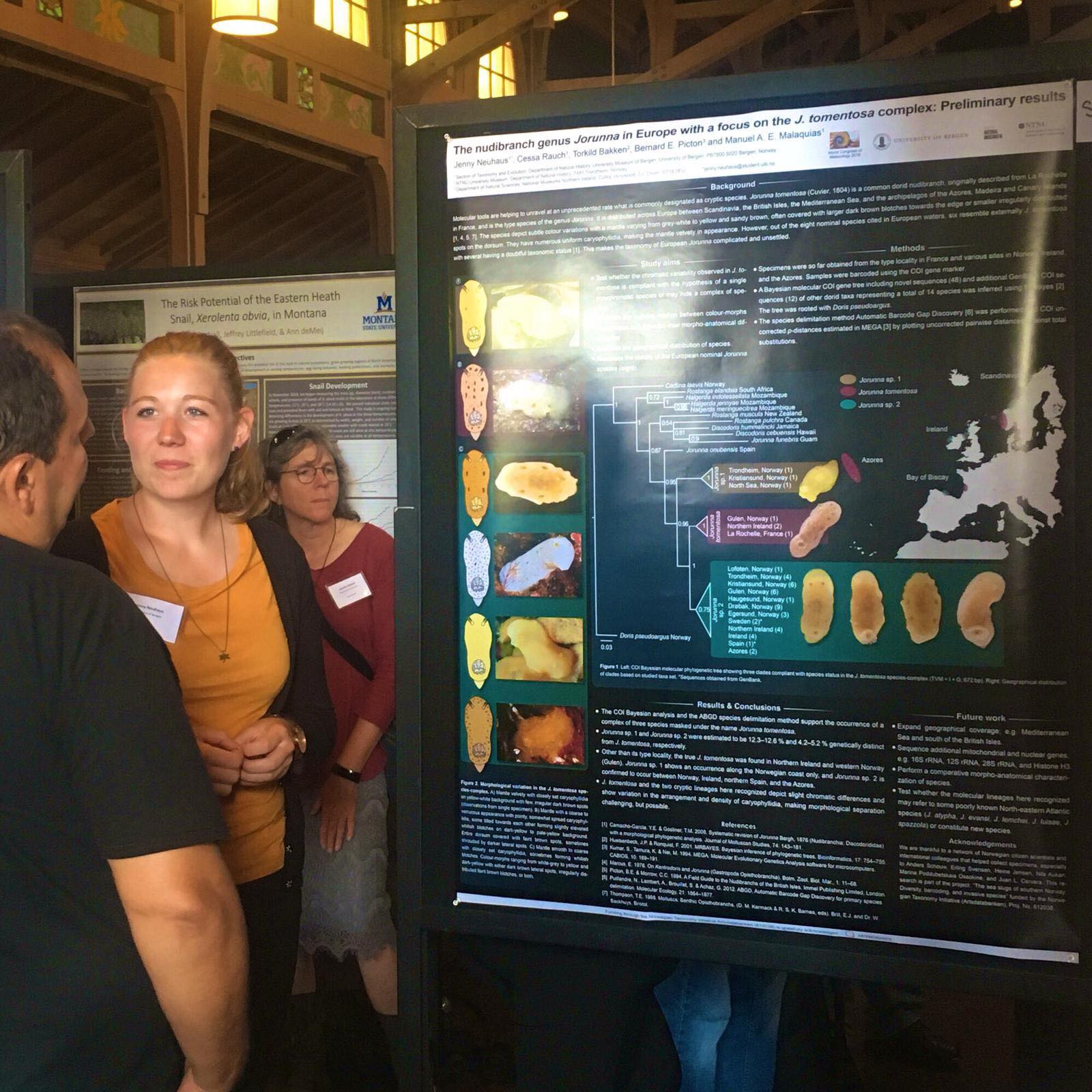 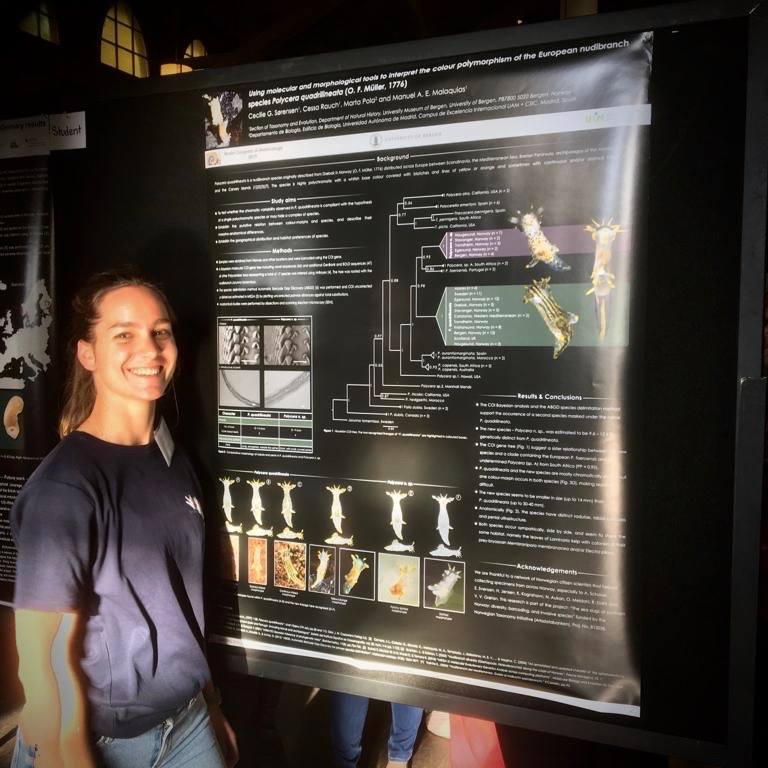 Justine presenting her work on Scaphander

On Tuesday we had a crammed agenda with multiple speakers talking at the same time, divided over the different halls in a variety of sessions. It was a busy day of running around trying to catch those talks one were most interested in. Justine had her talk in the Systematics session about her PhD research on Scaphander titled; First global phylogeny of the deep-sea gastropod genus Scaphander reveals higher diversity, a possible need for generic revision and polyphyly across oceans. It received a lot of attention and numerous questions afterwards, it was great to see how her research was perceived with so much curiosity and enthusiasm.

Wednesday we had a day off filled with several excursions. Jenny went to the whale watching trip, Justine went to spot marine mammals and Cessa to a trip along the coast to meet and greet the Californian red giants. The trips were all well organized and a very nice break off the week as the many presentations and sessions made the days long and intense. The whale watching trip took place in Monterey Bay and Jenny was lucky enough to observe the mighty blue whale, Balaenoptera musculus, plenty of humpback whales (Megaptera novaeangliae), and several sunfish (Mola mola) swimming at the surface. It was an incredible experience for her to be able to watch the animals thrive in the great Pacific Ocean. Cessa walking in between the Californian red giants

The trip to South Monterey was along the California’s rugged coastline and provided one of the most spectacular maritime vistas in the world. It has peaks dotted with the coast redwoods that go all the way to the water’s edge. The trip took you to Pfeiffer Big Sur State Park where we got the opportunity to walk through the redwood forest. Along the way we stopped at numerous scenic vistas, it was definitely a memorable day .

On Thursday, all well rested, we had another hectic day full of presentations, this time it was Cessa’s turn, she would talk about the ‘Sea slugs of Southern Norway project as an example of citizen science’ (Picture 8. Cessa presenting the sea slugs of Southern Norway project). It was placed in the citizen science session and many that attended had questions about citizen science which constituted a great opportunity to share our experience acquired during the last year of our project. Friday, on the last day of the conference, Manuel had his talk about the phylogeny and diversity of the Indo-West Pacific gastropods Haloa sensu lato (Cephalaspidea: Haminoeidae): Tethyan vicariance, generic diversity, and ecological specialization. This was part of the recent collaborative work his previous PhD student Trond Oskars The day was closed off with a big dinner and the award ceremony. Prizes were handed out to the best student’s oral and poster presentations. Jenny was awarded by the Malacological Society of London the prize for the best student poster. This was a very exciting way to end a successful conference trip!