Dr Joan Soto from the University of Valencia (Spain), visited us at the museum during August/September 2017 to collaborate with HYPNO on the mysterious issue of linking hydroids and their medusae. We asked him about his experience, and got the following: Joan, ready to go jelly-hunting under the blue sky!

Imagine a caterpillar and its butterfly described as different species by the scientific community. Now think on how confusing it would be if everybody kept calling them with different names over centuries. Well, this is the case of many hydroids and their corresponding medusae!

Hydrozoans, together with other well-known animals such as corals, anemones and jellyfishes, are included within the Phylum Cnidaria. Most hydrozoans are metagenetic, which means that they alternate between asexual (the polyp, usually benthic) and sexual (medusae, usually pelagic) stages in their life. Since the early works by Linnaeus in the mid-18th century, the very first scientists who showed interest in hydrozoans specialized primarily in a single stage of their life cycle, often neglecting the other, and even those courageous scientists who accepted the challenge of studying both groups were unable to discover the correspondence between such different animals as the polyp and the medusa.

Nowadays, in the era of molecular tools, new techniques are revealing that things are not what they seem, neither do they look like what they really are. Thanks to project HYPNO, several links between polyps and medusae have been found, with the subsequent adjustment in their ID (a.k.a. their scientific name), but that is not all! New evidences are bringing to light that some hydrozoans, even if they are morphologically identical to each other, in reality belong to different species, a fact known as “cryptic species”.

Both of these phenomena may be involved in the taxonomic confusion surrounding the hydroid Stegopoma plicatile and the medusa Ptychogena crocea, the former a worldwide reported species, the latter a Norwegian endemism. How can a medusa be so restricted in distribution while its hydroid lives everywhere? Perhaps now we know the answer thanks to molecular tools: Stegopoma plicatile may represent a complex of species, hiding a misunderstood diversity, and similar S. plicatile hydroids may produce different Ptychogena medusae. In other words, perhaps the polyp does not have such a wide distribution, and records from other parts of the world should be re-examined in detail, paying special attention to the tiniest and easily overlooked details of its morphology. But of course this is a job only for very patient detectives… Hydroids of Stegopoma plicatile (like this one) from all over the world look very similar to each other, but may produce very different medusae. These beautiful medusae of Ptychogena crocea collected in Korsfjord were sexually mature. You can see the four gonads as folded masses of yellow tissue in each jellyfish.

Thus, this was the objective of my recent visit to the Bergen University Museum. An outstanding month surrounded by enthusiastic scientists, amazing landscapes, restricted doses of sun, and upcoming challenges: we trust that current and future analyses combining both molecular and morphological taxonomy will lead to settle the correspondence of Stegopoma hydroids with other Ptychogena-like medusae from all over the globe, or even to the description of new species to science! Team-work during the sampling makes everything a lot easier! The amazing crane of the RV “Hans Brattstrøm” allowed us to efficiently hunt for jellyfish at the fjords. It generally happens every two years. The event may be seen as a natural phenomenon – or maybe rather  a cultural phenomenon. I am sure it looks strange if observed from outside the community. A lot of people of all ages and affiliations meet up in places most of us usually did not even know existed, and we have the best week of our work-year. The bi-annual International Colloquium on Amphipoda (ICA) is without doubt the scientific meeting I look most forward to.  Every time. The fun, the science, the amphipods, the friendships, the coffee, the familiar banter, the late nights and early mornings, the discussions – all in an atmosphere of friendship. The first day of any ICA could be mistaken for a family-gathering – or the opening credits of any film about best friends. The room resounds of “oh – finally – there you are!”, “how are the kids/grandkids?”, “I missed you this last hour! Thought maybe you got lost since you weren’t here immediately” and not least “Come, let me give you that hug I promised!” Ten minutes later everybody will be organised by the large Polish group for some gathering or fun – and the rest of us are trying to find out how we can get one of the cool group-t-shirts the Łodz-group have concocted this year. Or maybe we should rather go for one of the other cool t-shirts picturing amphipods?

We do talk amphipods, of course. The incredible variety of the group (of animals – as well as people) opens up for a wide spectre of research-questions and approaches, and meetings allow time to learn from each other, get inspired, start new collaborations and share samples and ideas. Most important: the science of amphipods. Loads of interesting talks and posters! (all photos: AH Tandberg) Those getting to the poster-session fast enough win the crochet amphipods… (photo: AH Tandberg)

This years ICA was held in Trapani, Sicily – where prof Sabrina LoBrutto on a short one year notice had organised the meeting. The three days we met were packed with more than 60 talks, more than 60 posters and loads and loads of happy amphidologists. With the University situated right across the road from the beach, and a lunch hour long enough for both a coffee and a swim/sample search the friendly atmosphere stretched to drying towels on the railings of the university-hall and sea-salted hairstyles for many after lunch. The scientifically helpful Japanese amphipod t-shirt. (now the rest of you should notice the morphological differences between the families). (photo: AH Tandberg)

We always try to publish the Amphipod Newsletter to coincide with the ICA. You can download the newsletter both from the World Amphipoda Database and the Biodiversity Heritage Library (both places also have back-issues available for downloads). One of the features of the newsletter is a bibliography of amphipod-related literature, and a list of new taxa. Since last AN we have 79 new species, 14 new genera and 12 new families! Every AN includes an interview with one of the amphipodologists – this year you can get to know Wolfgang Zeidler and his Hyperiidea better.

The next ICA? In two years we meet in Dijon, France! I am already excited – and maybe there will be mustard-coloured t-shirts in honour of the location (or burgundy-coloured t-shirts)?  What I know already, is that it is going to be like meeting family.

The blog has been quiet over summer – but we’ve been busy!

The #AnnelidaCourse2017 came to an end, and happy participants went back to their home institutions with a lot of new knowledge, a increased contact network, and many new friends. a) Students working in the lab; b) Picking interesting animals from the samples onboard R/V Hans Brattström;
c) Animals to be studied; d) Group photo of most of the participants; e) Detailed study and drawing of a specimen; f) Field work onboard R/V Aurelia Fotos: K.Kongshavn (a,b,e), G. Kolbasova (c), G.Jolly (d), S. Rosli (f)

Heaps (HEAPS!) of samples have been cataloged and labeled, DNA-sequencing has completed on the shipment we sent in June and we’re working on analyzing the results, and samples from the cruises we particpated on have and are being sorted. 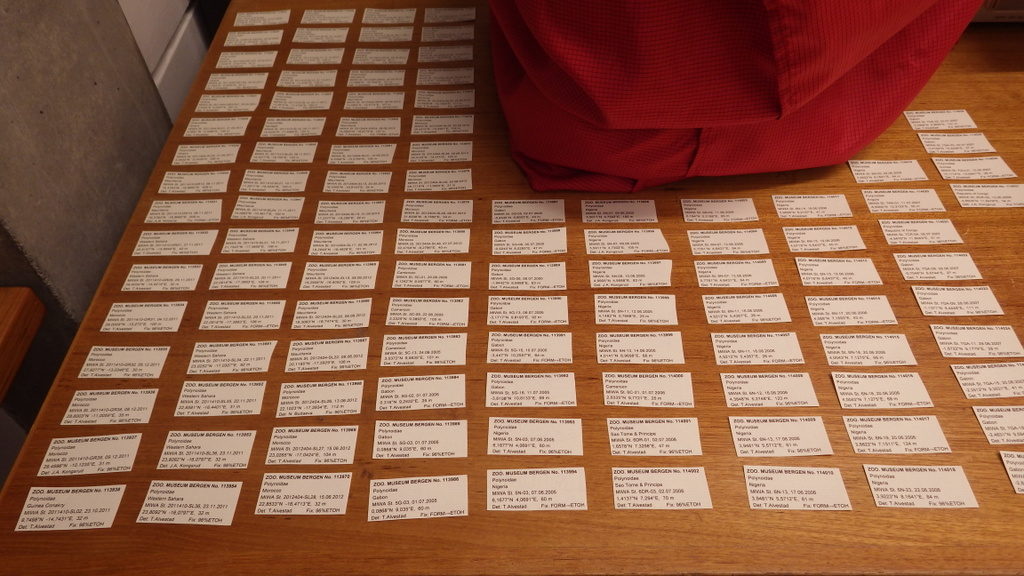 Labels need to be.. 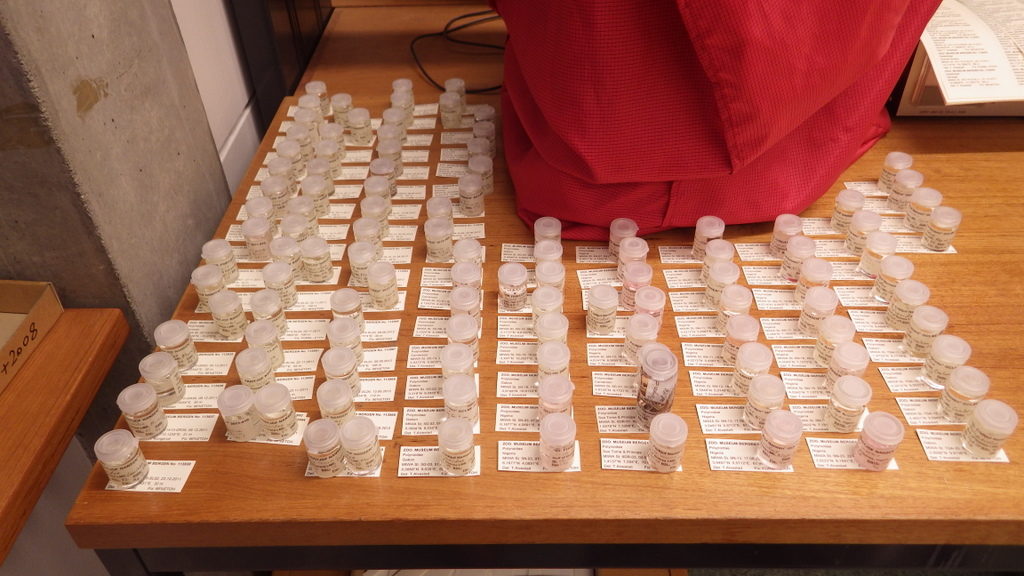 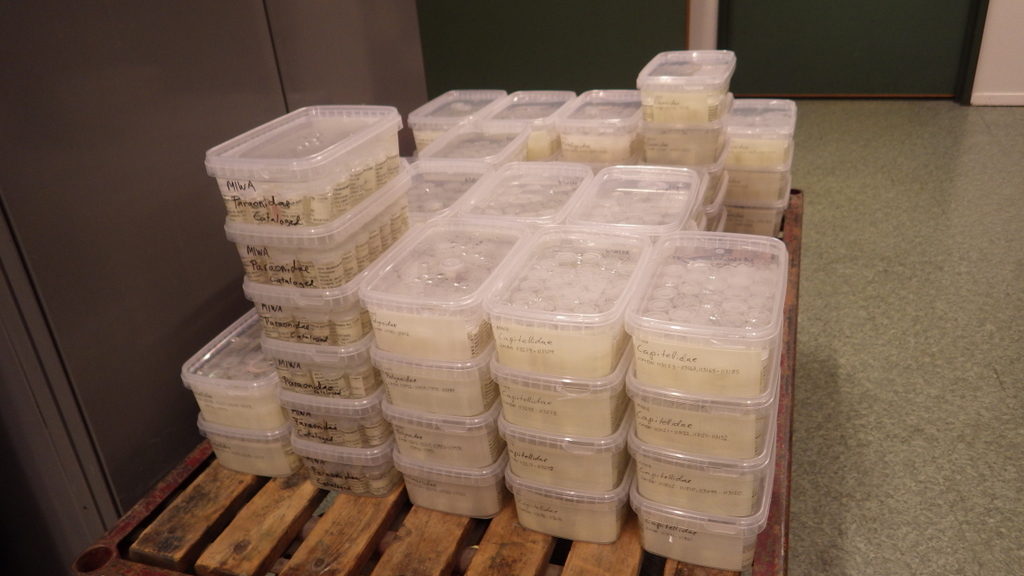 The next shipment of animals to be barcoded through NorBOL is being assembled – of marine invertebrates from our collections, one plate of polychaetes and one plate of isopods have been prepared, and we plan on completing a few more plates before shipping in October. Isopods for barcoding – these have all been collected and identified by the MAREANO project. Photo: K.Kongshavn

We will also get contributions from several of the Norwegian Taxonomy Initiative projects (Artsprosjekt) that are running, and a plate with insect samples made by the students of BIO233 (I was down there today giving them an introduction to barcoding, NorBOL and the BOLD database) – hopefully we’ll get good results on all of it.