Most animals are sloppy eaters. They have their favourite piece of food that they go for, and then they leave the rest. This allows for others to pick up where others leave. One of the laws of ecology is that “there is no such thing as an empty ecological niche”. That can be translated to “where there is a food-source (or a place to live) someone or something will use that food-source (or place to live). And that gets us to the sloppy eaters out there, and not least the animals picking up after all the sloppy eaters.

From the pigeons crowding under your cafe-table for your panini-crumbs to the rats in our sewers, our “local scavengers” tend to be animals we feel slightly uncomfortable around. Is it different with the scavengers we dont see so often? It does not seem that way. Vultures  are not the most popular birds, even the word “vulture” has a negative connotation – and we mainly use it in its non-bird meaning.

How about the scavengers of the sea? As on land, we have many different animal-groups that can be classified as scavengers. Many of the marine scavengers are invertebrates (even if some fishes also scavenge). Let us look at the scavenging Lysianassoid amphipods. Are these as little loved in our world as the rats and vultures seem to be? Lysianassoid amphipods can mostly be distinguished from other amphipods by their “telescope-like” antennae: a very fat inner article with the two next looking like a collapsed old fashioned radio-antenna; two short rings. We know that the antennae of crustaceans are often used to “smell” things in the water – food or mates or possibly even enemies. It is not thought that the radio-antenna-shape of the Lysianassoid antenna specifically has to do with being a scavenger, as other amphipods and indeed several other crustaceans not having such an antenna are also scavengers. But most Lysianassoids have that antennae, and it makes for an easy first-sorting for the scientist. (Getting further – towards a genus, or even species name on the other hand, is not so easy).

Other general traits in most Lysianassoids, are the smooth exterior, and their high swimming abilities. Both are good if you need to get to some leftover food-source fast, and to “dive” into the food-source while not getting stuck through the entry. Leftovers of bait (polarcod) after 24 hrs in the trap. Not much left for dinner… Photo: AHS Tandberg

And this is where many Lysianassoids loose out when it comes to human appreciation. They seem to love to scavenge on fish caught in fishnets and traps, and both professional and hobby fishers don’t like to share their catch. We dont think it is very appetising to find our fish-dinner “infested” by non-fish. I am quite sure the scavengers being pulled up with their lovely find of dead or dying fish also are not pleased with having to share their dinner with us.

Lysianassoid scavenging amphipods are the focus of our NBIC-financed project NorAmph2. Here, we will collect and register what different species are present in Norway, and we will try to barcode them. These are quite tricky animals to identify properly, but luckily we have teamed up with the best lysianassoid-expert we know – Tammy Horton from the National Oceanography Centre in Southampton, UK. 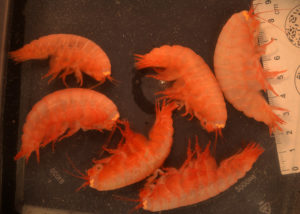 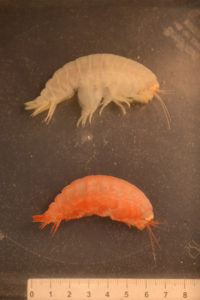 We use baited traps to collect: put some lovely, smelly fish out there and see who comes to dine. So far, we have collected from Svalbard in the north to Kong Haakon VIIs Hav in the south, and from the intertidal to the deep. They are often many, and the size-variation is great. We look forward to continuing finding out what species we have, and to see if what morphologically seems one species really is (only) one species genetically. (This previous blog-post (in Norwegian) tells the story about one scavenging amphipod that turned out to be 15 (or maybe even more!) separate species)

Quill worms belong to the annelid family Onuphidae and are called like that because of their unique tubes. The tubes are secreted by their inhabitants and are very light and rigid, resembling a quill, the basal part of a bird’s feather used for writing. Quill worms are epibenthic creatures capable of crawling on the surface of the sea floor carrying their tubes along. Their anterior feet are modified, strengthened and enlarged, bearing thick and stout bristles. These anterior feet are used for locomotion.

Quill worms are widely distributed in the ocean inhabiting mostly slope depths down to 2000 m. Being large in body size (up to 10-20 cm long), they can be quite abundant in some areas. Meyer et al. (2016) reported Hyalinoecia artifex reaching up to 70 ind./m2 in the Baltimore Canyon at 400 m water depth. Another quill worm, H. tubicola, which is very common in Norwegian waters, reached up to 272 ind./m2 at 365 m offshore of Chesapeake Bay (Wigley & Emery 1967).

Quill worms are believed to be motile scavengers. Baited monster camera experiments performed at 2000 m deep site in Baja California demonstrated that Hyalinoecia worms can accumulate in hundreds of specimens five hours after the bait (rotten fish) has been deployed (Dayton & Hessler 1972). Myer et al. (2016) analyzed the stable isotope content in Hyalinoecia artifex tissues confirming its secondary consumer status. Their results supported earlier observations on the gut content of the same species by Gaston (1987) showing the presence of the remains of various benthic invertebrates.

Video 2. Quill worm Hyalinoecia tubicola protruding from the tube opening. Three antennae and a pair of palps are seen on the head. The first two pairs of feet are enlarged and strengthened (by K. Kongshavn).