One of the cool things with the NorBOL-project is that it allows us spotlight animal groups that we don’t normally get to do much with. One such group is the sea spiders, or Pycnogonida. These spider-like critters wander around on the seafloor looking for other invertebrates to snack on (some also live on detritus and algae), and (presumably) for love. I certainly find a lot of them carrying egg sacks and young ones, so they must succeed every now and then! In the Pycnogonida, it is the males who care for the laid eggs and the young, rolling the eggs into one or several balls that he carries around on his ovigers. 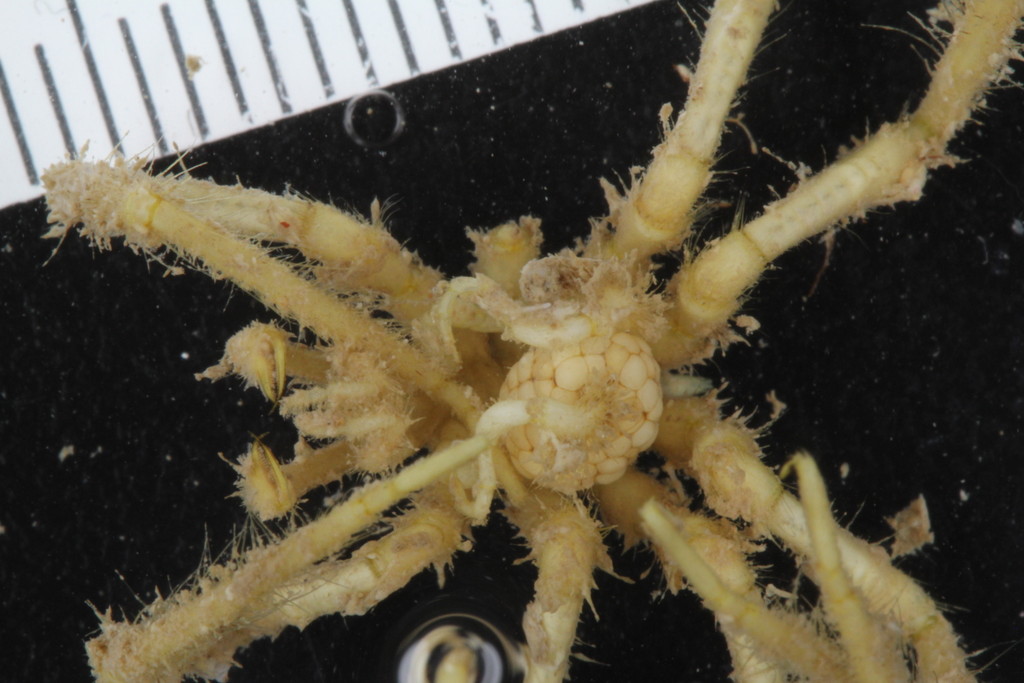 Nymphon hirtipes with eggs. It was collected at Spitsbergen 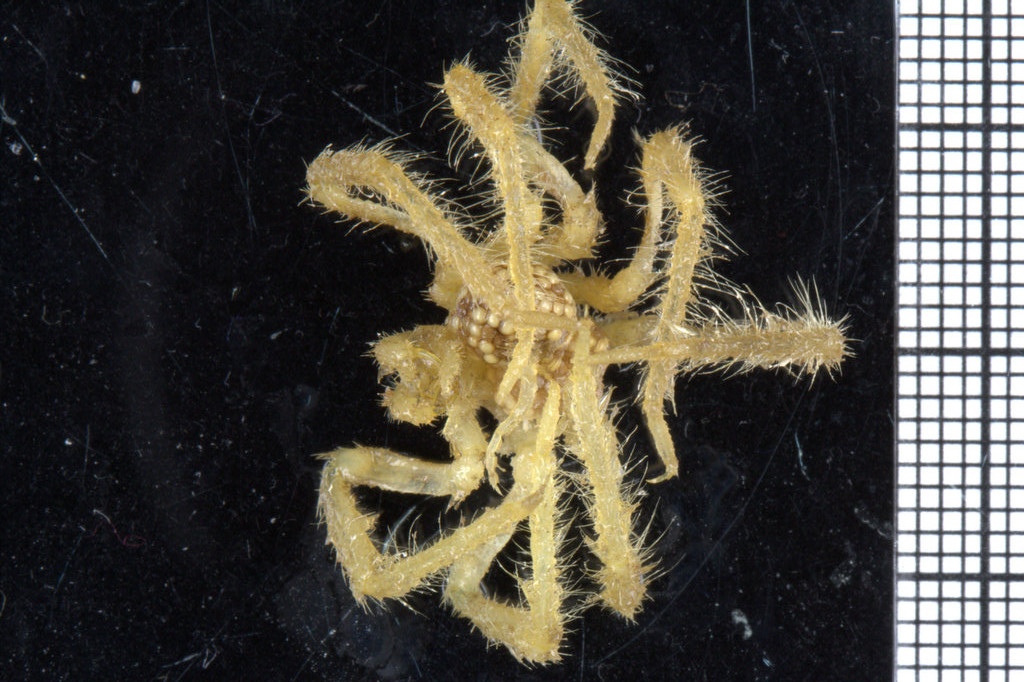 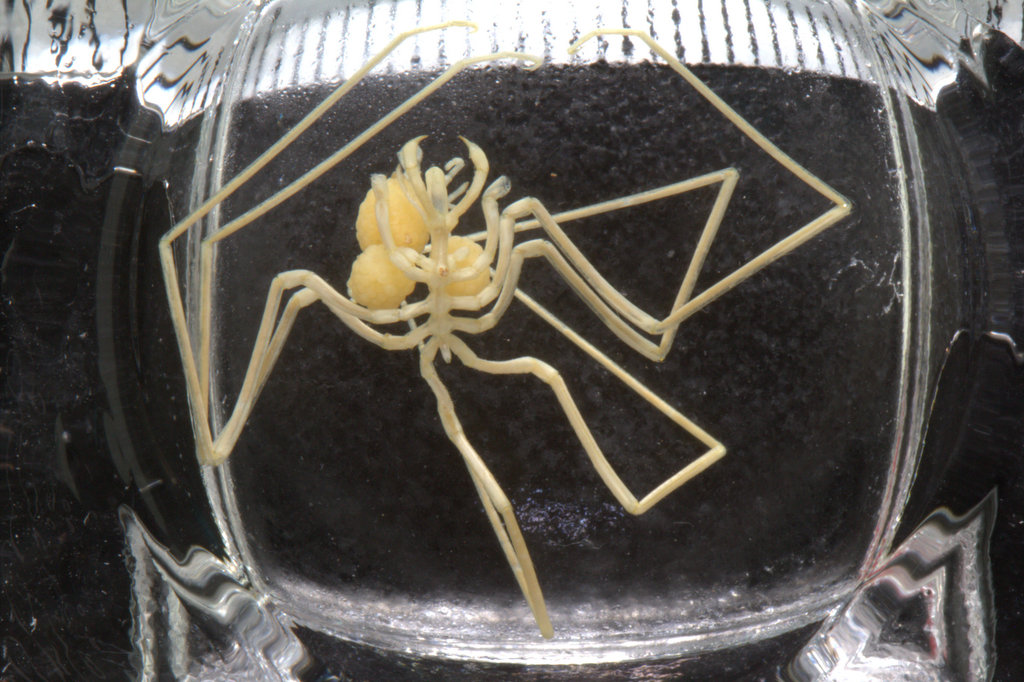 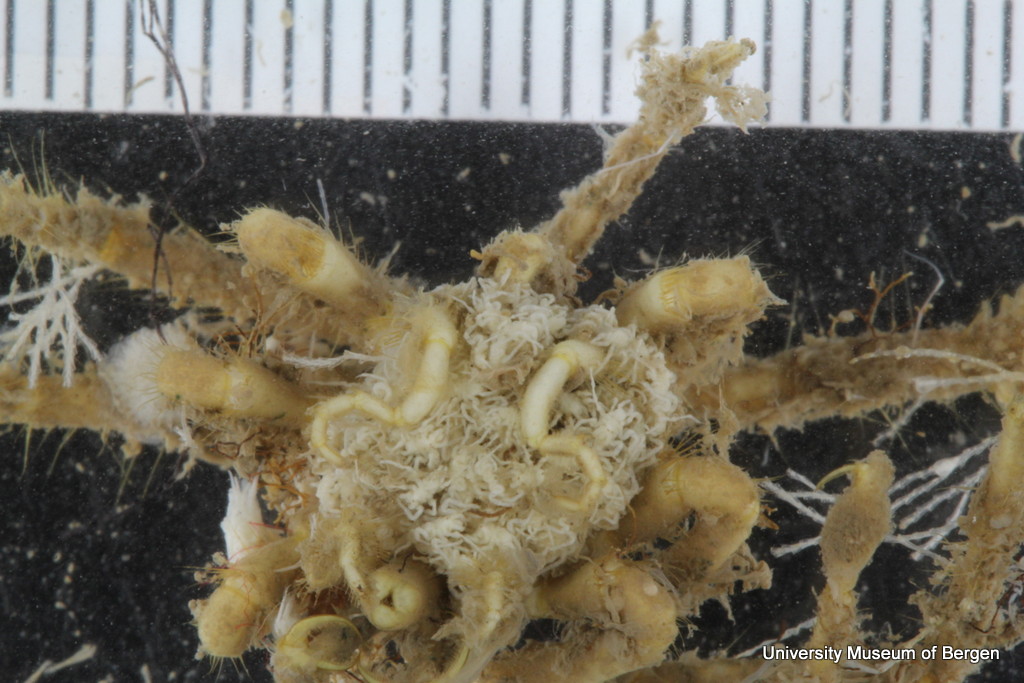 The ones I photographed ranged from tiny to over 30 cm: Colossendeis angusta, collected by MAREANO – this is bigger than a handful At first glance they look a lot like the spiders we find on land, but they are really a very different class of animals (literally!); The sea spiders are found within

Pycnogonida (Class) (from WoRMS), whilst “land spiders” are found within the order Aranea in the class Arachnida.

Extant (now-living) members of the Pycnogonida are found within the order Pantopoda, which translates into “all legs”, which describes them quite well! They have even moved most of their internal organs (of which they have rather few; respiration is done across the body surface, so no gills) into the legs.

The more I look at them, the funnier they look – but that may be in the eye of the beholder, as a few arachnophobes passing by the camera have declared loudly that there is nothing charming to find here – I beg to disagree! Some species, like this Nymphon gracile, can also swim: “…the swimming motions are the same as those used in walking, but more vigorously executed” King 1974 They are usually slow movers: Hover over the image to see a pycnogonid walking on the sea floor

To fill a plate with tissue samples from 95 specimens (1 animal = 1 specimen) of pycnogonida doesn’t sound too complicated, does it? Well, it turned out to be a bit of an adventure to gather enough animals that had been preserved in such a way that we could get DNA out of them (older material is usually fixated in Formaldehyde, which makes it unsuited for genetic work), and that was identified (had a name to them). Since we are in the process of building up the national (and international) reference library (the BOLD database) that the short DNA-segments (the “barcodes”) are to be matched up to later when someone wants to know which species “Animal X” belongs to, we need to know which species we are submitting for sequencing.

Our collection of barcode-compatible identified pycnogonids received a welcome boost when the shipment of processed material (identified, and measured for biomass) from MAREANO‘s beamtrals collected in 2013 arrived, as these had been fixated in ethanol – and identified by researchers who have worked extensively with the group.

Even so, I couldn’t fill a whole plate with only those specimens. Thankfully, I have skilled collegues that were able to put species names to almost all of the critters I could hunt down in our collections, and so now we have 95 animals ready from 26 different species! We also have some bona fide mysteries that we hope the BOLD-database will help us solve as well; animals that does not comply with any of the identification keys…!

Fingers crossed for a very successful sequence run and a lot of new information about  the Pycnogonida of Norway!